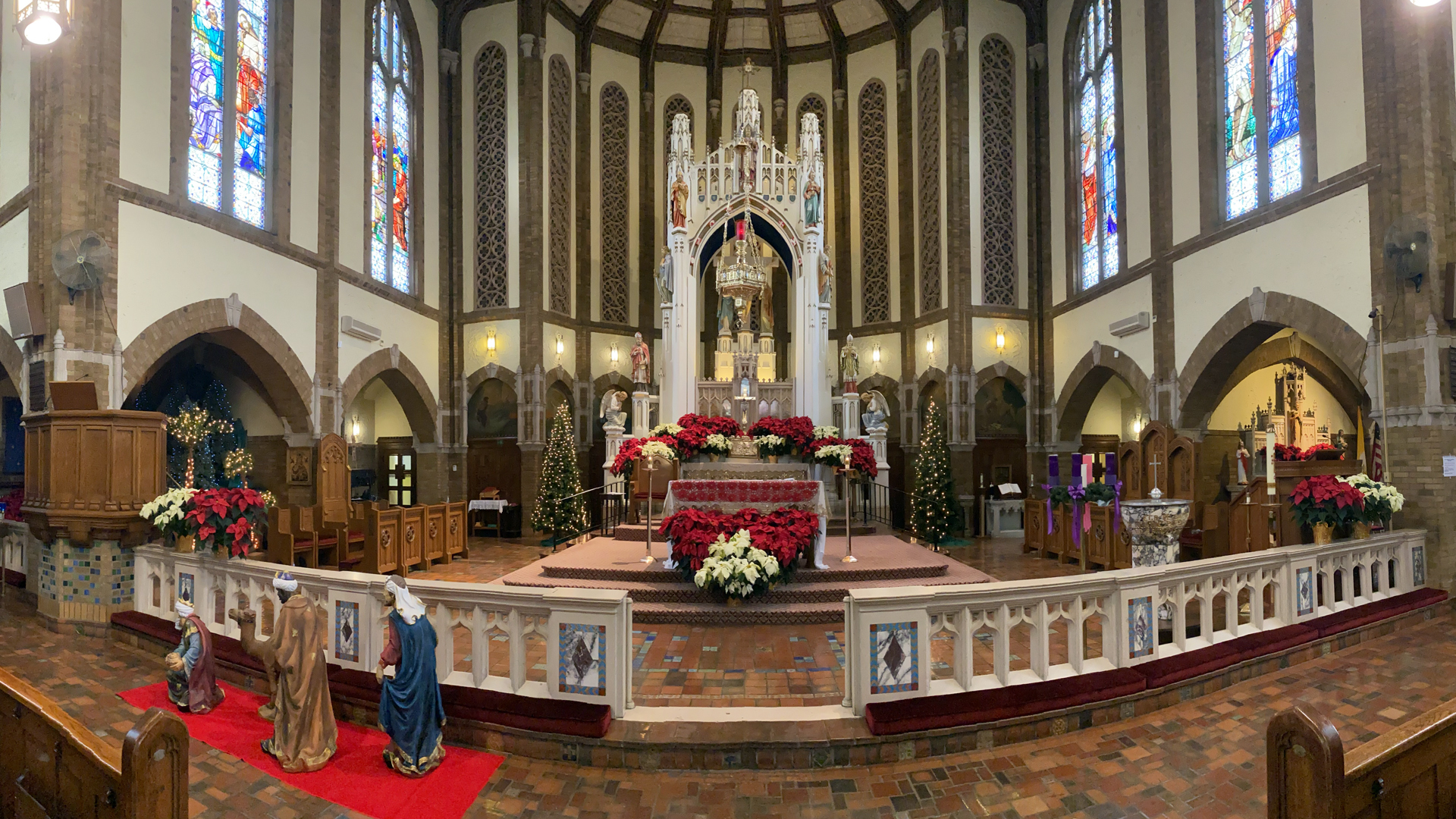 In the 1840’s a number of farmers from the Duengenheim-Urmersbach area of Germany immigrated to the United States and settled in the east Dearborn area (then known as Springwells).  Their first order of business was to establish a school for their children.  In 1846 a small school was constructed on the farm of Peter Joseph Esper.  To attend Sunday Mass the early settlers would journey to St. Mary’s Church in downtown Detroit (Old St. Mary’s).  Eventually a Redemptorist priest started to visit Dearborn to celebrate mass in the Esper farmhouse.  In 1852, as more and more of the farmhouse was given over to church activities, the Esper family donated 4 acres of their land to establish St. Alphonsus Parish and a small church was constructed. In 1874, as the parish continued to grow, a larger church was built which stood until 1952.  A cemetery was established next to this church, but within 10 years the cemetery was moved a block north to its present location to make way for road construction.  The cemetery now has about 300 burials representing most of the pioneer families of the East Dearborn area.  Henry Ford’s maternal grandfather is buried in the cemetery, and it is said that Ford visited his grandfather’s grave earlier in the day on the day that he died.  Many descendants of these pioneer families are still members of the parish.

In the space of a few years, the area was transformed from farmland into a residential neighborhood. The wartime industrial boom and the rapidly expanding auto industry drew people from various parts of the country and resulted in the city of Fordson being described in the 1920's as ". . . the fastest growing community in the nation.".  The farms were rapidly being developed into city, and the parish was growing.  In 1922 a new school building was built, and expanded in 1926.  The 1874 church was too small so services began to be held in the school auditorium while plans were being made for a new larger church building.  Construction began in 1928 of a Neo-Gothic style church seating 1,200, which was formally dedicated in 1930.  This is the church we presently use.

As a result of this rapid population growth, a need arose for a Catholic parish for English-speaking residents. St. Alphonsus serving German immigrants, and St. Barbara Church, founded in 1924 for Polish-speaking Catholics, could not satisfy the needs of the English-speaking parishioners. In answer to numerous requests from area residents, Archbishop Michael J. Gallagher, on June 24, 1927, canonically established St. Clement Parish. The first organizational meeting of the parish was held on August 23, 1927 in the Schaefer Building on the northeast corner of Michigan and Schaefer. John Schaefer offered the use of his building to serve as a temporary church until a new church could be erected.  The Schaefer Building served as a center of worship for the parish until June 24, 1928, when Mass was celebrated for the first time in the new church on Kenilworth near Ruby.