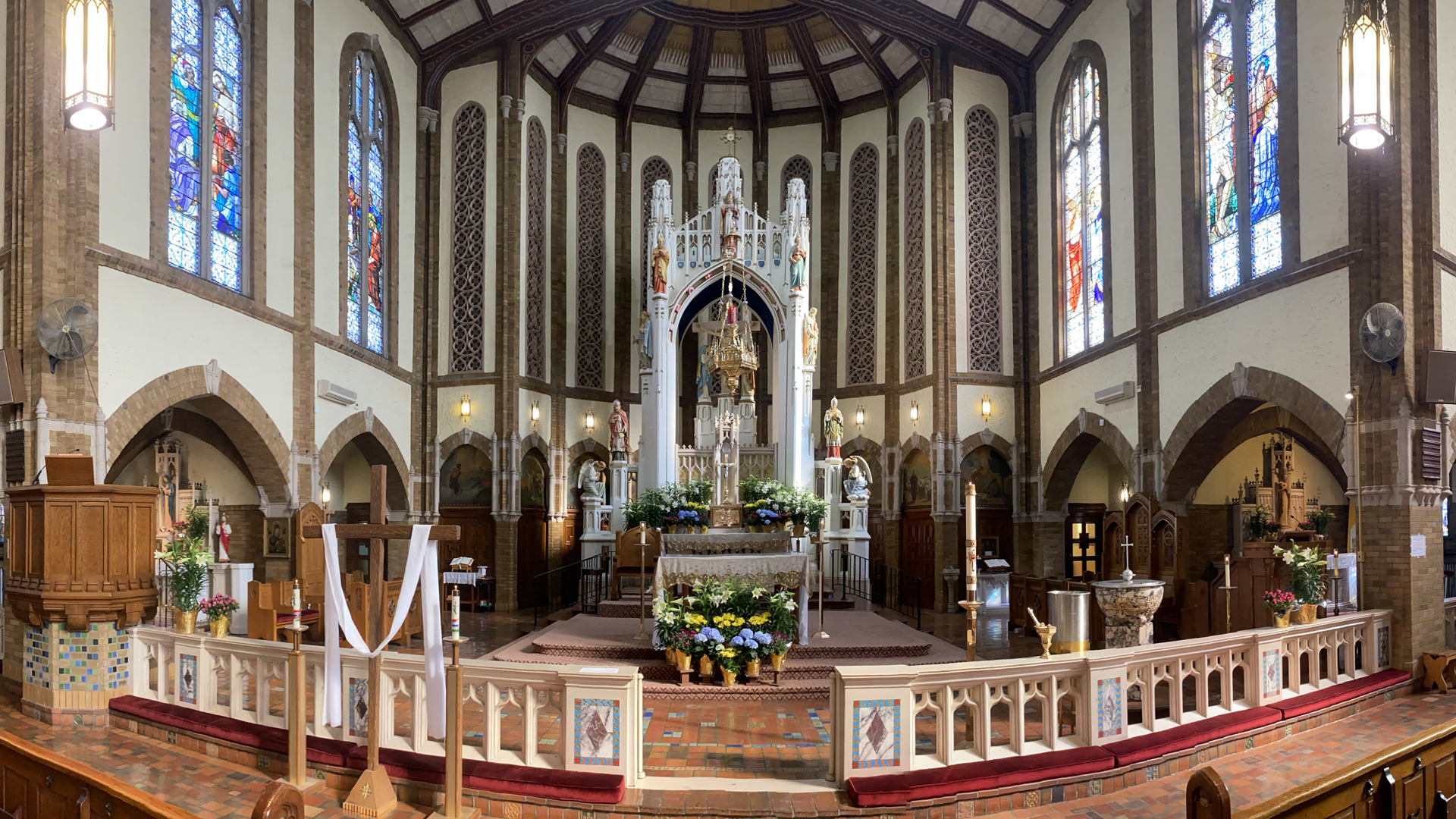 90th Anniversary of the Church Dedication

May 2020 marks the 90th anniversary of the dedication of our present church building.  Construction began on the new St. Alphonsus church in April 1928.  This was to replace the previous building, located at the corner of Warren and Schaefer.  Built in 1874, it had become too small for the growing parish.  After the school was completed in 1926 mass was celebrated in the school auditorium due to the inadequate size of the old church.  Easter Sunday, March 31, 1929 was the first time mass was celebrated in the new church, and from that time on all services were conducted in it, although the altars weren’t completed until February 1930.  On May 18, 1930 the new church was dedicated by Bishop Gallagher.

Designed by architect Arthur des Rosiers in the Neo-Gothic style, the church features floors of Pewabic tiles, paintings by Detroit artist Alfred Wrobbel and a 38 foot high altar of Roman stone and Italian marble.
St. Alphonsus parish was established in 1852 with the construction of a small church on the farm of Peter Joseph Esper at Warren and Schaefer in what was then known as Springwells.  Up to this time mass had been celebrated in the Esper family farmhouse by a visiting priest. St. Alphonsus parish merged with St. Clement parish in 2015 to create the present St. Alphonsus-St. Clement parish. 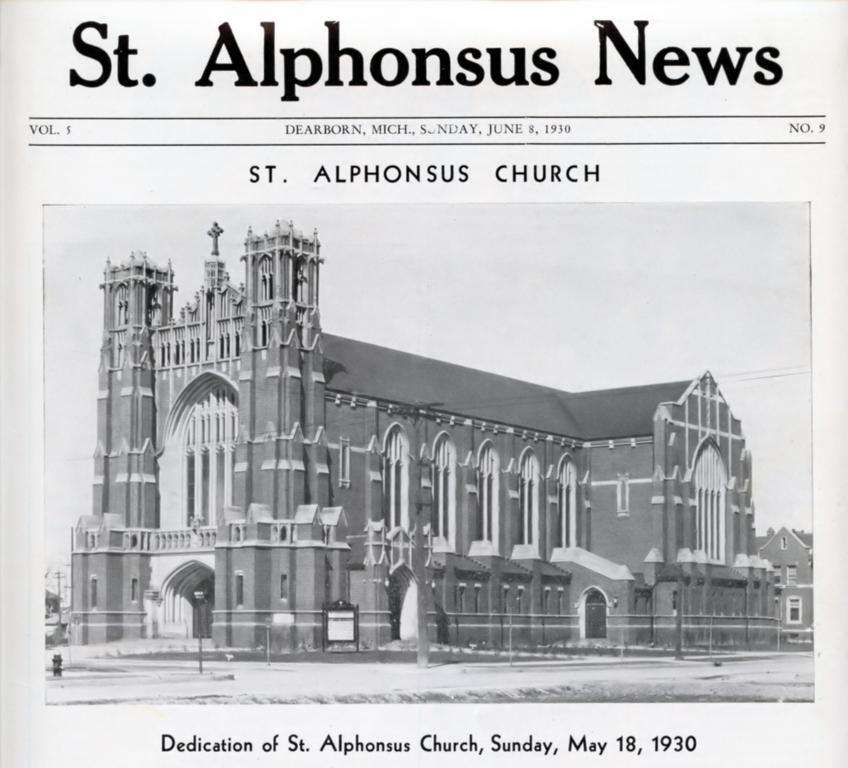 Sunday May 18, 1930, was a jubilant day for the parishioners and will ever be a memorable day in the annals of St. Alphonsus Parish, for on that day the new Church was dedicated by Right Rev. Michael J. Gallagher in the presence of a large crowd of parishioners, many visiting Priest and Sisters.

The Bishop was escorted from Miller Road and Morrow Circle to the rectory by the following organizations:  Fordson High School Band, St. Alphonsus School Children, St. Alphonsus Usher Club, Fordson Council No. 2660 Knights of Columbus, Detroit Commandery of the Knights of Columbus, the Drum Corps from the Fordson Post No. 1494 Veterans of Foreign Wars, and the Fourth Degree Knights.
The doors of the Church were locked until after the Bishop blessed the exterior of the building.  Then the Fourth Degree Knights stood as guard of honor in the center aisle of the Church while the Bishop and Priests chanting the litany passed from the exterior of the building into the sanctuary.
After the dedication services a solemn High Mass, coram espiscopo was chanted by Rt. Rev. Msgr. John S. Mies, a former pastor of St. Alphonsus.  The Reverend Fathers Peter and Michael Esper, descendants of the Esper family in whose house the first Mass of the parish was offered in 1852, served as deacon and sub-deacon at the Mass.  Rev. William F. Murphy, D.D., was general master of ceremonies and Rev. Charles A. Uldenberg was master of ceremonies of the Mass.  Monsignor Doyle, several visiting Priest and twenty-seven Acolytes were in the sanctuary during the Mass.  Rt. Rev. Bishop Gallagher addressed the congregation.  The following is a brief summary of his sermon.

“There has been remarkable progress made in the parish within the past ten years.  Nine years ago Monsignor Mies build the first unit of the beautiful school.  Two years later he was appointed as pastor of St. John’s parish and we needed someone with zeal and ability to take his place and continue the work.  The parish needed someone who was a builder.  Father Klich was pastor at Belding during this time.  While there he pre presented plans for a thirty thousand dollar Church and asked permission to build.  I willingly consented and in a short time the building was completed and the debt removed.  Owing to this proven ability and other remarkable achievements, he was appointed as pastor of St. Alphonsus.  As a result we have this wonderful parish unit including a modernly equipped school, beautiful convent, and rectory and this magnificent edifice which has just been dedicated to the service of almighty God.

I wish to thank the people who came out in thousands on this cold day to welcome the Bishop with bands and banners.  When we build a church like this you can imagine the golden diadem in heaven which must outdo our earthly attempts.  Some people think that money is wasted in erecting buildings such as this.  But this is not true.  Three hundred and twenty million Catholics could not be held together without beautiful Churches, schools and residences.  Christ was born in a stable but He so willed that to give us an example of poverty.  Would we wish to leave the Holy of Holies in a tent when we are living in mansions of stone and cedar? The name “tabernacle” is handed down to us from the olden tabernacle that Moses carried around with him.  Women laid their necklaces, earrings, rings, and bracelets of precious gems and gold at the feet of Moses to glorify the tabernacle.  Solomon was given the special privilege of building the first temple of God and he was enabled to do so by means of sacrifices made by the people.  All through the generations people have made sacrifices to build holy temples and Houses of God.  So today as the people of St. Alphonsus parish have made sacrifices to erect this beautiful temple, God is blessing them abundantly.

When in St. Peter’s at Rome, I felt very close to heaven when assisting at Mass.  The sanctuary was filled with Cardinals, Bishops, Priests and Prelates, the Swiss Guard and Gendarmes, and eighty-five thousand worshippers, assisted at the Mass.  At the consecration, when the Pope elevated the Host and pronounced the words “This is My Body,” the guards stood at attention, a hush passed over the assembled crowd, then strains of music were heard from the dome of St. Peter’s  - the music of Paradise.  It was most inspiring, most impressive.

We should never leave the Church vacant; we should make frequent visits to our Lord in the tabernacle.  Remember this is a house of prayer and when you are kneeling in prayer you are as near God as you will ever be on earth for He is most surely here, and, we have everything here to inspire prayer.

I hope the splendid spirit of co-operation and generosity which built this edifice will continue for there is still a debt to be paid and if you follow the able direction and leadership of your pastor, you will soon have all debts paid. How happy the people, who have given so freely and generously, must feel for God will surely bless their efforts and generosity a hundredfold.”

The Rt. Rev. Monsignor John Doyle read a message from Pope Pius XI whereby he conferred his special blessing on all who were present at the dedication services.

During the singing of the Mass by the men’s choir, Walter Dalton sang the Ave Maria as a beautiful solo.  Rt. Rev. Bishop Gallagher officiated at the Solemn Benediction of the Most Blessed Sacrament which followed the Mass.  It was sung by the St. Alphonsus Junior Boys Choir.  The Knights of Columbus stood at attention as guard of honor during the Benediction.

The entire dedication service was very inspiring and beautiful.  The altars were beautifully decorated with yellow roses which harmonized with the gold vestments of the celebrants, all forming a picture long to be remembered.  The new Church is a gift of the parishioners on the occasion of the Diamond Jubilee of the Parish in 1927 and it will be a lasting memorial to the generosity; and faith of the people of St. Alphonsus Parish.